Visit the most famous cathedral in Paris to learn the history of Notre-Dame Cathedral. The craftmanship is fantastic and the building's story will amaze.

What you need to know about Notre-Dame Cathedral

Access: Entry to Notre-Dame Cathedral is free. If you want to climb the tower or descend into the crypt then it will cost you a few EUR to do so but nothing more than €7 for either.

Fact: The famous towers of the cathedral look to be mirror images of one another but are in fact not the same. The North tower is actually slightly bigger and were not built at the same time. The building is something of a patchwork quilt of architectural influences over time as the construction, addition and restoration took place over many years.

Littered through the cathedral's history are coronations, executions, restorations, literary masterpieces and other key events that are fascinating to learn about when walking through the building.

As many as 28 kings lost their heads at Notre-Dame Cathedral. Fear not, there was no mass regicidal massacre in the grounds. During the French Revolution after Louis XVI was executed by guillotine in 1793, the anti-monarchy movement did not spare iconography or architecture from feeling their wrath. This culminated in the statues of biblical kings that were fixtures of the cathedral being decapitated. 21 of the heads were fortunately found in 1977 and now feature as museum exhibits.

The fact that the building is even still standing given the tumultuous times it withstood, is mainly thanks to two very different figures from France's past.

A victorious Napoléon Bonaparte declared that his coronation as emperor would take place at Notre-Dame. With the building in a pretty shabby state after years of neglect and also from the events of the French Revolution, Napoléon's decision to return the building to church use and to have his triumphal moment within its walls gave it renewed prominence.

That decision may have made it more noteworthy but the real impetus to renovate and restore the cathedral was driven after French author Victor Hugo wrote his novel Notre-Dame de Paris in 1831 (you probably know the story as the Hunchback of Notre-Dame, and it is a Globedge favourite). The book is written with the perspective where the main character is the cathedral itself, as opposed to the hunched Quasimodo.

The book being a monstrous success in France, and internationally subsequently over time, led to calls from eminent Parisians to restore the cathedral to its former glory. Ultimately work managed by Jean-Baptiste-Antoine Lassus and Eugène Viollet-le-Duc brought about a renaissance for Notre-Dame and its reinvigorated facade and innards stand proudly to this day. 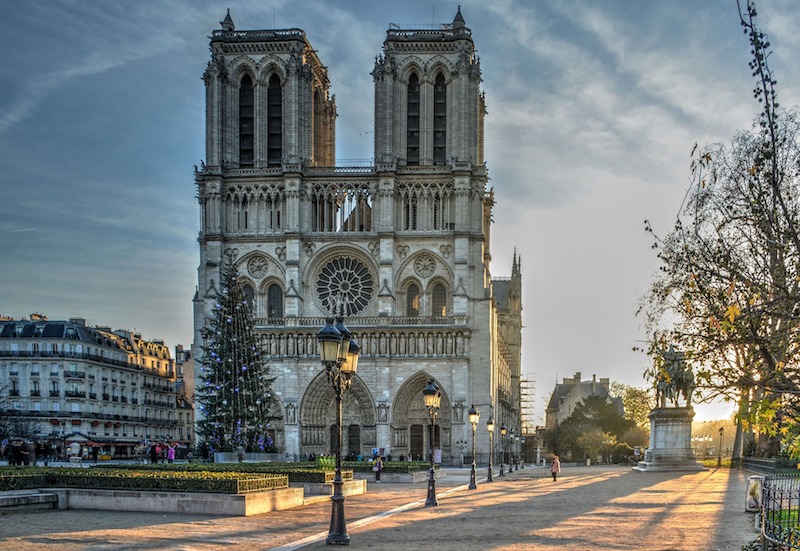 Cathédrale Notre-Dame de Paris stands out as one of the most stunning church buildings in Europe.

Some of the most recognisable photos of Notre-Dame Cathedral are those featuring the hideous gargoyles adorning the towers. If you travel to meet them then beware!

They are in fact not part of the original facade's decorations. Both the fully working gargoyles (the ones with waterspouts in them) and the other grotesques (the ones that are not waterspouts) were added in the mid-nineteenth century as part of the restoration work.

They make for a fantastic photo if you can get up close to them after climbing the towers. 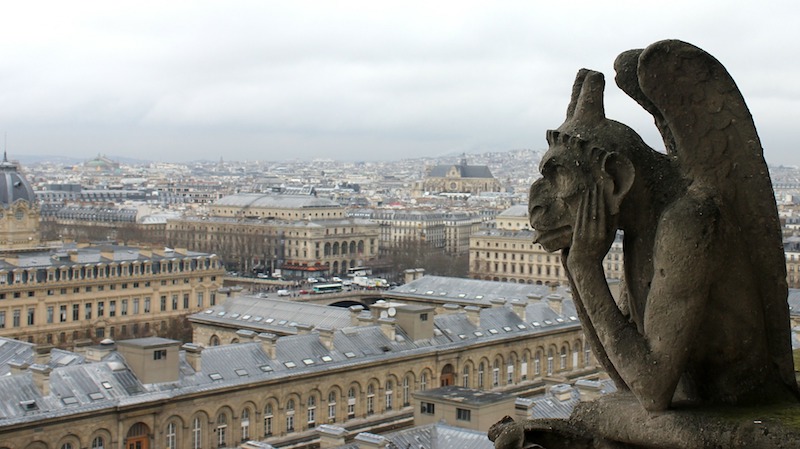 The view from the towers of Notre-Dame is amazing and you'll come across famous gargoyles up there, including the brooding Stryge

Your challenge is ascending 442 steps of the tower. Your reward is a panoramic view of the surrounding Paris area that is worth every step. No options to take a lift in a building as old as this, unlike the Eiffel Tower, so you just need to grit your teeth and soldier on upwards. It is totally worth it though once you get to the top.

As you make your way up to the top you will come across the Salle Haute (EN: Upper Room) where you will see fine examples of gothic architecture and ribbed vaults that are impressive and interesting.

The aforementioned gargoyles and grotesques are viewable from the Galarie des Chimères. The highlight of which is Stryge (pictured above) who has featured in many photos from the cathedral over the years.

When you are almost at the top of the tower you will reach the famous building's Belfry. Here you are greeted to an audience with Emmanuel, the 13 tonne great bell of Notre-Dame. 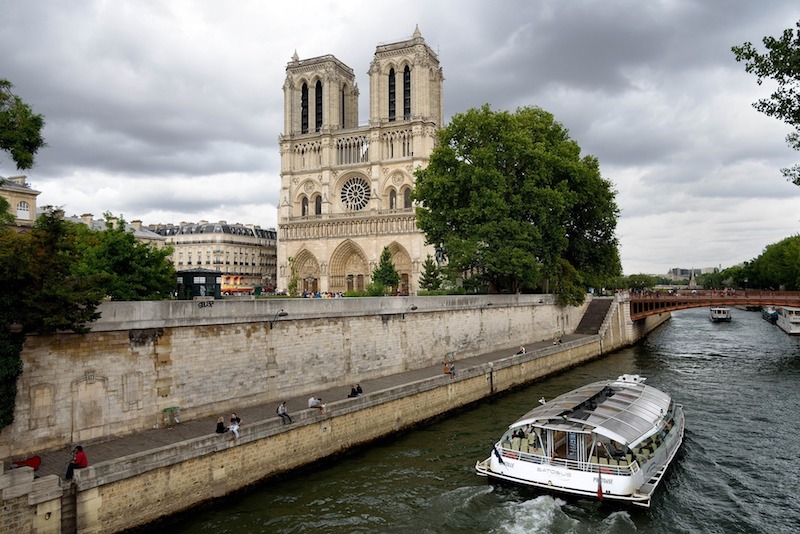 The view of Notre-Dame from the nearby River Seine.