Walk through the world famous Louvre Museum in the heart of Paris that contains such artistic jewels as Leonardo da Vinci's Mona Lisa masterpiece.

What you need to know about the Louvre Museum

Access: Cost of entry is €17 if bought in advance online which also gets you a ticket that gains entry with less queuing. If you buy a ticket on the day from the museum then it will cost you €15 but expect to queue for longer to get in. There are periods of free entry after 18:00 on the first Saturday of every month, as well as on the celebratory Bastille Day (14 July) for all who visit the Louvre.

All visitors aged under 18, as well as those who travel to the museum from anywhere in the EEA (EU countries, Iceland, Norway, Liechtenstein) who are aged between 18-25, can enjoy free entry all throughout the year.

On Friday nights after 18:00 all visitors aged under 26 can gain free entry no matter which country they come from.

Fact: The Louvre has actually had many uses over the past millennium. Originally it was built as a military fortress in 1190, and then reconstructed as the lavish palace buildings you can see today. It stood as a royal palace until 1793 when it was reopened as a museum and given over to the people of France.

The Louvre Museum is HUGE so be realistic when you visit

First things first. The Louvre is enormous. It is the largest museum in the world and covers a frankly insanely large area that totals 782,910 square feet.

Because of this it will be impossible to see every single thing in the museum. It is better to see the most popular pieces on display and then grab a guide book and decide what you are most interested in seeing.

Because of its size, the collections are sprawling and all impressive. The Globedge recommendation is to see the Mona Lisa - we all want to see it after all - and then either follow the advice above and find some highlights in the guide book, or alternatively just wander around and enjoy the setting (the building is stunning given its former life as a royal palace) and see which artistic marvels you happen across. It might be a good idea go focus on a single wing of the museum per visit to it.

There is subtle signage and there are members of staff who can point you in the direction of something cool if you would like a little help on your travel leisurely around the exhibits. 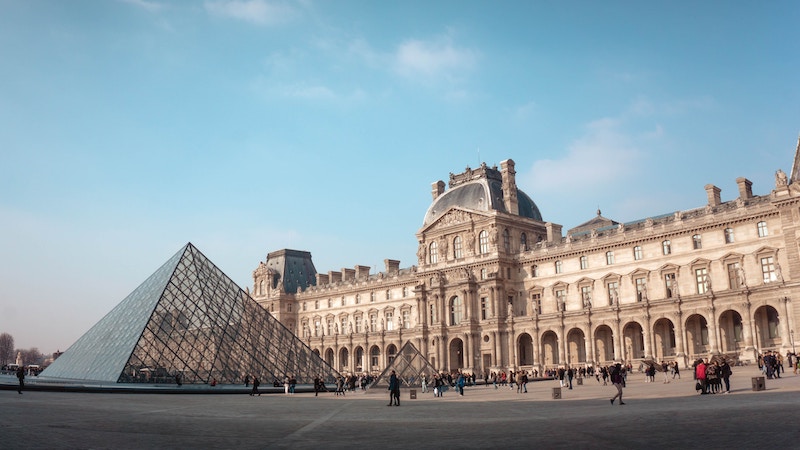 Thanks to its time as a royal palace before becoming a museum, the buildings that make up the Louvre are staggering.

The Mona Lisa is as popular as you might expect

There is no work of art in any museum or gallery in the world that generates as much excitement as the Mona Lisa.

Throngs of visitors descend on the Louvre every day to gaze upon da Vinci's enigmatic masterpiece.

With no definitive ruling on who the painting features and given its place in modern mythology (thanks to Dan Brown), as well as the painting being mysteriously captivating, the popularity of the artwork has reached fever pitch.

Get to the museum early in the morning to avoid the crowds around the Mona Lisa being frankly silly. You will never be in a position to spend quality time one on one with the painting but you will at least be able to spend a little more time looking at one of the world's finest examples of renaissance art. 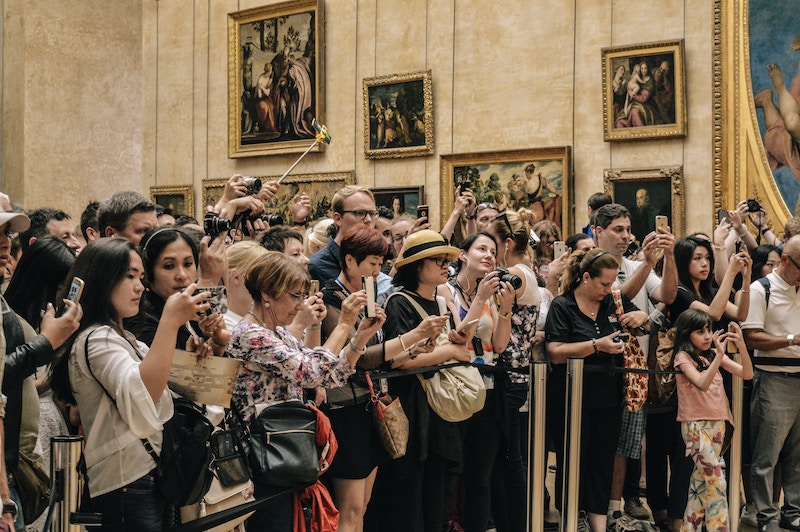 It is best to get to the Louvre early or late in the day to avoid some of the crowds around the Mona Lisa. 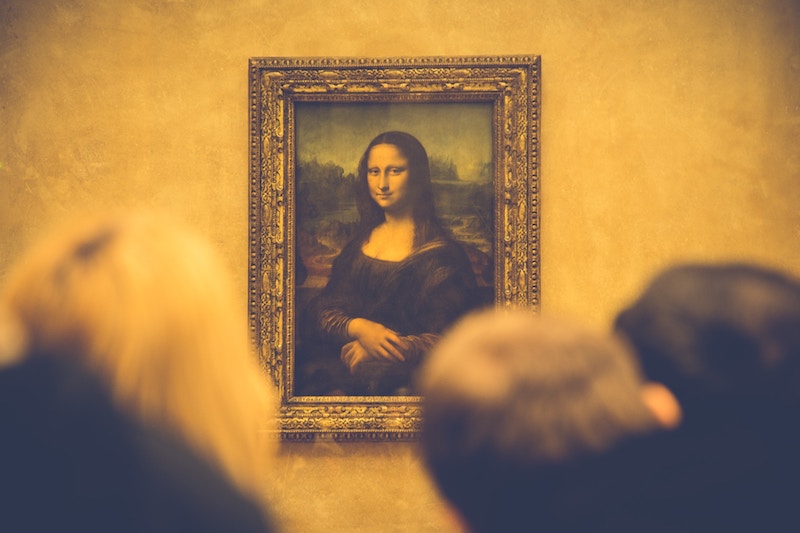 If you get to the front of the crowds you can get a very good view of the Mona Lisa. (Apologies for leaning man's head)

There are multiple options if you want to learn more

Take an audio guide that you can hold to your ear throughout your wander around the Louvre to learn more about the history and artistic significance of the pieces on display. The audio guide is available in English (and other languages) which is helpful given that some of the signs and explanations on display are in French only.

If this is a bit of a pain in the behind for you to do and you prefer to learn from a person, and get priority entry to the museum along with it, you can book tickets in advance online and benefit from a an expert guide who will take you through the exhibits, enlighten you about the art on show and answer any questions you might have. There is a premium for this service naturally but is the way you will learn the most from your trip.

The one down side of the guided tour is that you are not in charge of where you go in the museum so if you prefer to be independent and in control, we recommend getting the audio guide and treading your own path.

How long should your visit to the Louvre Museum last

There is no way to see everything in one visit as mentioned earlier. Realistically seeing one wing of the museum, and perhaps a smaller Sully Wing will take you between three and four hours. You will also want to spend some time seeing the outside of the Louvre for sure. The architecture is stunning even by Paris standards and is seriously impressive.

The ground also include the famous glass pyramid and the Arc de Triomphe du Carrousel which is much smaller than the actual Arc de Triomphe in the centre of the city but is still a big, imposing and impressive celebratory arch that commemorates Napoleons' victories. 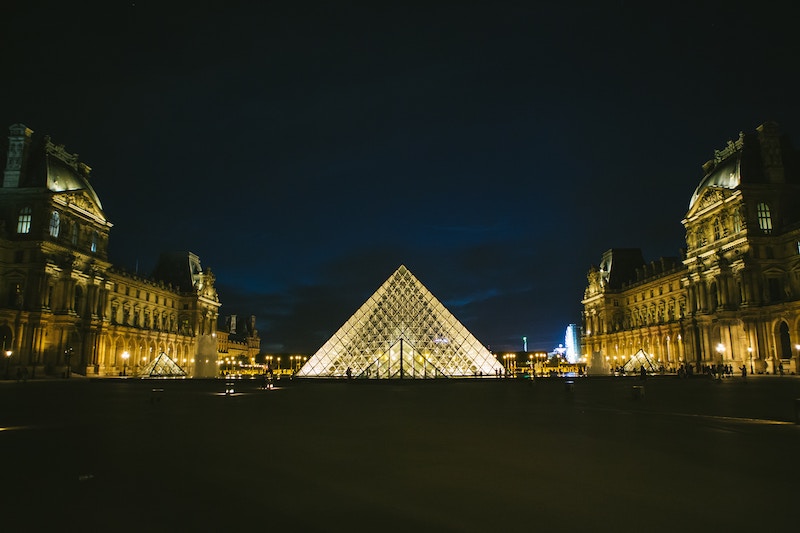 The stunning glass pyramid lit up at night.

The glass pyramid up close.

What to see at the Louvre Museum

Visit the Denon Wing to see the most famous and popular section of the museum. The Mona Lisa is housed in this wing. It is also home to paintings and sculptures from Italy, Spain and France, as well we sculptures and artefacts from Roman times. The Denon Wing is a must-see for people visiting for the first time.

The smaller central wing known as the Sully Wing is where you can find pieces from Ancient Greece and fabulous artefacts from Egypt's heyday. There are also works of art from Iran, France and impressively the remnants of the medieval structure that once stood on the site of the Louvre centuries before.

The royal collection is the focal point of the Richelieu Wing and this is where you will find jewels, crowns, tapestry and many other wide-ranging regnal items from as far back as the Renaissance, the reign of King Louis XIV and relatively modern 19th century periods. It is hard to list all the items on show because the collection covers so many things that were once property of the French ruling families, including many rooms that are complete and in situ so you can walk through history and get a feel for the sort of lavish lifestyle that was enjoyed by French royals. 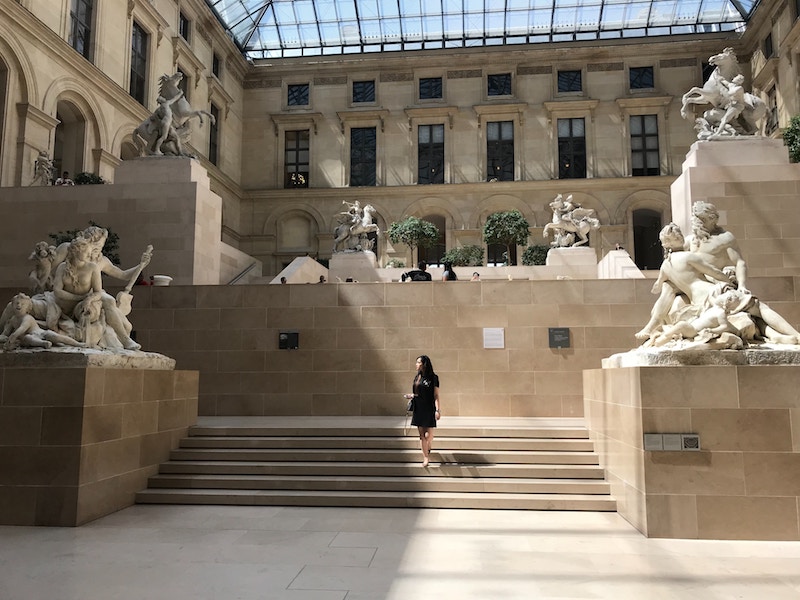 You will find a huge array of exhibits and works of art throughout your time wandering through the museum.

Should you visit the Louvre Museum?

Its scale and size can be imposing and intimidating, and you may have a sense that you won't be able to see everything you want to see so there is no point in going. It is a common but incorrect assumption. The artwork and ancient treasures on show at the Louvre are so plentiful and of such incredible variety that you will be astounded by the beauty of the exhibits. You 100% absolutely should make this an attraction in Paris to go to. You will absolutely love it and see parts of a truly astounding collection.