See one of the world's most historic churches when you travel to London. Westminster Abbey has been the scene of coronations and royal weddings for centuries in the UK.

What you need to know about Westminster Abbey

Nearby attractions: Houses of Parliament.

Access: The cost of an entry ticket to Westminster Abbey is around £20 with the usual concessions available for seniors and children.

Fact: Westminster Abbey has been the sight of the coronation of every British monarch since 1066. thirty nine coronations have taken place including 1953 when the current monarch, Queen Elizabeth II, was crowned Queen.

Westminster Abbey is house of worship truly steeped in history

Look anywhere in the Abbey and you will be confronted by history as the building has played host to some of the most important figures Britain has produced. Over 700 years the Abbey has been the site of the burials of countless luminaries, coronations and royal weddings. The wedding of the Duke and Duchess of Cambridge in 2011 providing a global audience for the famous church in Westminster once more.

Built in 1245, the Abbey has stood near the banks of the River Thames in London for centuries and was made a World Heritage Site in 1987 by UNESCO.

Monarchs are unsurprisingly buried in Westminster Abbey but other famous figures frequent its tombs. Geoffrey Chaucer is buried in a part of the Abbey now known as Poets' Corner. Near to Chaucer are burial sites or memorialisations for Dickens, Eliot, Wordsworth, Milton, Shakespeare and more. 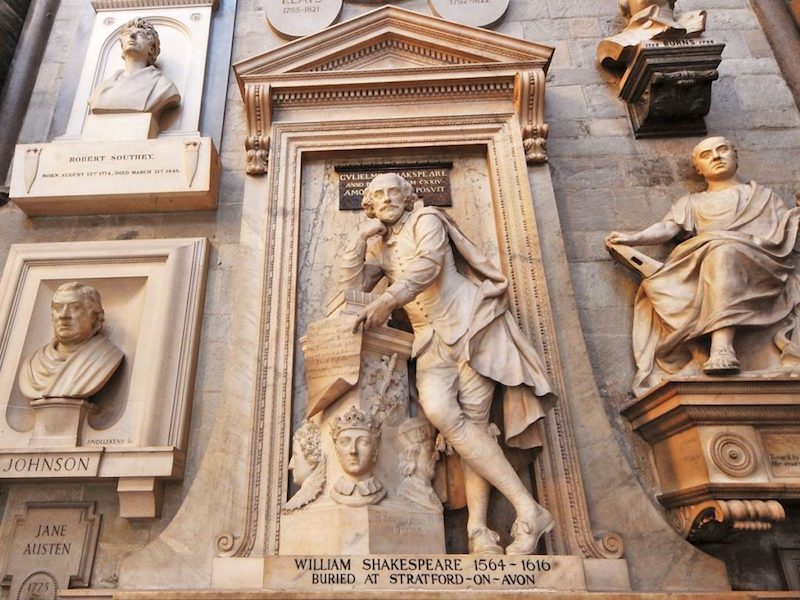 The memorial of William Shakespeare in Poets' Corner of Westminster Abbey

The seat of power

One famous attraction in Westminster Abbey is the Coronation Throne, otherwise known as King Edward's Chair.

The throne has traditionally included the Stone of Scone under the seat, but this historic stone was returned into the custody of Scotland (now on display at Edinburgh Castle) and will only be brought back to London when the next coronation ceremony takes place.

The throne is heavily guarded as many tourists who travel to see it have attempted to carve their name into it over the years. A Globedge clarification for all is that buying a ticket to enter the Abbey does not give you free license to start breaking or graffitiing things so please be respectful of the historical setting that you are touring.

Westminster Abbey is a family affair

The British Royal Family have a long established association with Westminster Abbey. With 16 royal weddings to date, combined with all the coronations over the centuries, the royals have grown much accustomed to ceremonies taking place there. On special occasions like these it is not uncommon to see crowds of thousands, many of whom travel from all over the world, congregate outside to catch a glimpse of the British royal family.

A place to honour the fallen

There is one burial site in Westminster Abbey that you are not allowed to step on when walking through the Nave. This is the Tomb of the Unknown Warrior. Interred within are the remains of an unidentified soldier slain during World War I, and the grave has come to symbolise and memorialise all fallen combatants from the conflict. There is a similar grave site in Paris near the Arc de Triomphe that is the overall commemoration place for France's fallen soldiers. The Tomb of the Unknown Warrior in Westminster Abbey

Aside from the main church building, there are four gardens within Westminster Abbey. Explore them at your leisure and see a few added extras when you are on your tour of the historic site.

St Catherine's Garden is the place where you can see the ruins of the former monastery.

The College Garden was once the site of an infirmary garden complete with medicinal plants and herbs; some of which still surprisingly grow there to this day.

The Garth is a simple square stretch of green grass that is surrounded by The Cloisters; a place of tranquility containing scented plants and a fountain.

Make a day of your visit

If you do plan on visiting Westminster Abbey then do it when you have a few hours to spare. That way you can travel to the Abbey and then also see the nearby Houses of Parliament (including Big Ben) and then cross the bridge over the Thames to ride the London Eye too. Enjoy!