Tiergarten is Berlin's largest park and can be found sprawling over many acres including near the Reichstag and Brandenburg Gate. It is also home to Berlin Zoo which is a major attraction.

What you need to know about Tiergarten

Access: There is no charge to visit Tiergarten as it is a public park and free space for the people of Berlin.

Fact: The park has over 14 miles of paths and walkways which provide lovely routes to stroll along as you enjoy the biggest and oldest green space in the city.

A picturesque park with royal roots

Tiergarten was the one-time haunt of the King who used to hunt there. Things are a lot less intense thankfully in modern times with the whole area transformed into a tranquil, lovely spot for locals and tourists alike to wander around and chill.

It looks good in any season but spring and autumn there are particular Globedge favourites with the blossoming and changing colours of the leaves respectively. In winter things can get very cold in Berlin so this is probably the least optimal time to visit and have a stroll. If the weather is not too inclement however then a nice coat and scarf will serve you well as you go exploring.

In summer it is a fantastic place to stop for a picnic. Providing you have enough time on your trip (a weekend break is probably taken up with the main Berlin attractions), a kick-ass way to spend a couple of hours in between sightseeing is certainly picking up some local delicacies and heading to a nice spot within the park to relax and nibble on tasty culinary wares of Berlin's cafes and eateries.

There is also the occasional sculpture and monument dotted around the park that you will potentially come across as you travel through the grounds. One that is particularly significant is the monument to homosexual people killed during the Second World War. It looks a fairly plain monument but there is a slit in its side that, when peered through, reveals a looping sexual video projection (it isn't too graphic fear not) that serves as a subtle statement of intent by modern-day Berlin to be a wonderfully accepting and progressive place. 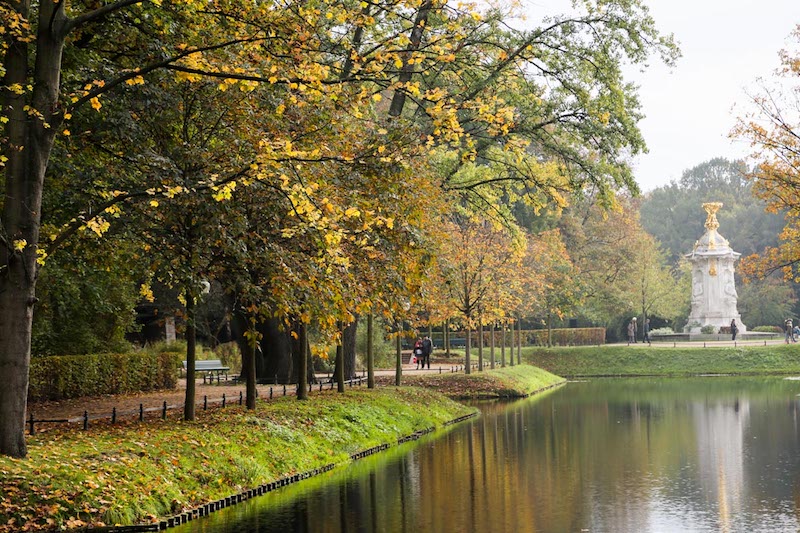 The walk through Tiergarten provides some lovely scenic areas that contrast from the hustle and bustle of modern-day Berlin.

The area also houses Berlin Zoo if that is your thing

The Berlin Zoo has many exotic animals on show for those who are keen to see some of the most famous wild beasts up close and personal. It is an option to visit if this is your personal taste of experience.

The Globedge preference and view on this is that wild animals are best viewed in the wild, and that zoos can of course play a part in conservation efforts but there is a fine line between real conservation and using animals as commercial commodities.

None of that is to cast any judgement on Berlin Zoo specifically and you can be reassured that it is a completely professional organisation. We would just prefer to see animals in their natural habitats.

If the zoo is your thing then go for it. We just prefer to use Tiergarten to chill in the park.