All aboard the Cutty Sark for tales of adventures on the high seas. Renovated and permanently in place in Greenwich, this ship is a must-see when in London.

What you need to know about the Cutty Sark

Access: Entry to the Cutty Sark is ticketed (c. £13) but can be combined with other attractions in the Royal Greenwich Museums at a discount to see multiple tourist attractions with one ticket purchase.

Fact: Built in the 19th century (1869) the Cutty Sark spent her time at sea carrying cargoes of tea from China and wool from Australia. Built for speed, the mighty clipper set records of her day for the fastest voyage from Sydney to London by completing the voyage in 73 days.

Restored to her former glory

A fire broke out in 2007 that devastated the famous old ship. Experts have painstakingly restored the vessel to the point where she is now able to receive visitors. The ship is now housed in a bespoke glass surround making it possible for tourists to walk beneath her keel and see the ship from a unique and amazing angle.

Another fire dig damage to the ship in 2014. Thankfully damage to the ship has again been taken care of and public access has resumed meaning one of the finest examples of tea clippers remains a source of awe and education for those who travel to see her. 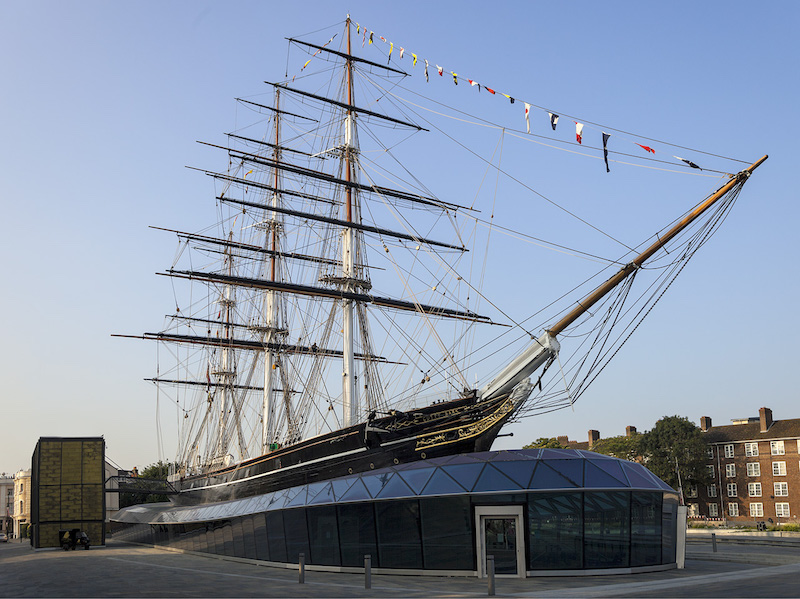 Learn the history of this historic ship

Although a fine example of British shipbuilding, the Cutty Sark was in fact sold to a Portuguese company in 1895 and renamed Ferreira. She spent until 1922 ferrying various cargo back and forth between Europe and South America.

Wilfrid Dowman, a retired captain who had spent time during his youth training aboard the Cutty Sark, came across her and was determined to purchase her. Despite being sold to another company in Portugal he eventually got his wish and in 1922 was able to sail her home to England where early restoration work was able to finally take place.

After being used as a training ship the Cutty Sark, original name of course restored, was sailed to her current mooring on the Thames in Greenwich. She has remained in place from 1952 to this present day.

Visitors can now see under the majestic old tea clipper at the renovated visitor centre.

There are occasional events that take place there such as corporate engagements, silent discos and festivities that, if you are lucky enough to attend, would make for an especially novel and unique way to experience the grand old ship. This sort of event isn't essential but is a pretty neat way to experience an iconic London landmark certainly. If you get the chance to attend one then be sure to take up the offer. If you don't, then be sure to still visit the boat and combine it with a trip to see the Royal Observatory nearby.

Whatever the circumstance of your visit, the Cutty Sark is well worth a visit when you're in London and offers a little slice of history that you may struggle to find anywhere else.