What you need to know about Sarajevo

Language: In Sarajevo, as with Bosnia in general, you will find that locals obviously speak the Bosnian language but also other languages that remain spoken/understood from other nearby former Yugoslav states. The Bosnian War may have contributed to the split up of the region into several independent nations but the linguistics of neighbouring states naturally remains prevalent given the relative recency of the conflict. English is spoken by many in the service industry, especially hotels, whereas some bars and restaurant staff will be less fluent but still super friendly.

Currency: The Bosnia and Herzegovina convertible mark is the currency in Bosnia. The currency code is BAM.

Banking: ATMs are common and retailers and restaurants accept all major bank cards that you will likely have with you when you travel.

Weather: The weather is warm in the summer and can easily reach below zero degrees in the winter time. The city has neighbouring high hills that contribute to the temperature being slightly less than warm in the autumnal and wintery period. Unless it is the summer time the Globedge recommendation is to pack a jacket to be safe.

When you arrive in the main centre of Sarajevo it is impossible not to be struck by the remnants of the Bosnian War. The conflict affected the lives of the entire city and the scars of this will take a generation to heal. The architecture is adorned with bullet holes and warnings of sniper fire - PAZZI METAK! being spray painted onto some buildings as a warning that literally translates to “BEWARE BULLETS!” - but housed within those buildings are friendly, warm and inviting locals keen to greet visitors and embrace the city’s future.

There are museums that are dedicated to the genocide, the main one being the Museum of Crimes Against Humanity and Genocide that is a very difficult place to walk through and read the accounts of what happened. It has to be said though that if you are going to visit Sarajevo then understanding the conflict is something that you should certainly do.

The Latin Bridge that was the scene of Archduke Franz Ferdinand’s assassination - the starting pistol to World War I - can be found in the middle of the city, with the small 'Sarajevo Museum 1878-1918' literally right next to it on the corner of the road. That one is only two rooms so will take you 15 mins max to see.

Elsewhere there are modern touches like the Escape Room Sarajevo game that is a fun place to spend an hour attempting to ‘break out’ of your temporary captivity. Also check out the latest shops that can be found in the main market area that sell many local crafts and goods that might appeal if you like to scratch your shopping itch when you are on holiday. The high street itself is home to boutiques and shops that will cater to whatever you are likely to be in the mood to purchase. 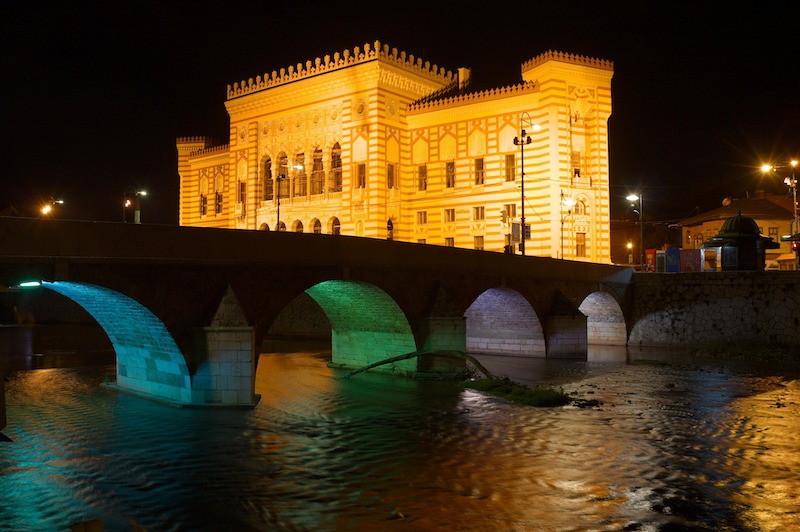 One of the main arteries that juts out from the city centre is colloquially known as ‘sniper alley’. This is an area where locals were under constant threat from long-range rifle shots from gunmen positioned in high-rise buildings and the nearby hills. To walk down it these days it feels like a normal part of the city - the university campus is nearby for example - but you can not help but feel ill at ease when imagining the potential for a sniper to gun you down if you were just going about your day to day business during the war.

One of the more impressive and ‘must see’ things about the modern area is that some of the abandoned buildings that can be found just off the main road have now become canvases for graffiti and street art. The most stunning is a frankly huge mural in tribute of legendary singer Dawid Bowie that two local artists painted following his death in 2016. It is a hidden gem that you would potentially never know was there unless it is pointed out - the Globedge gang happened across it by complete accident when wandering down a side street to be nosey - and it is 100% worth checking out. It is for sure one of the more Instagramable things in Sarajevo.

Local restaurants and bars are friendly, inviting and have a lovely unique vibe

You will find a few awesome bars in the city like Zlatna Ribica where you can sign a bank note from your country and slip it under the table top glass to add to the collection from travellers from around the world.

There are also places like City Pub and Pink Houdini that are worth checking out for drinks and a bite to eat.

For proper meals with a local touch try Dveri (amazing local food), Klopa (local and Italian food in a lovely indoor 'garden' setting) and Cevabdzinica Zmaj (chilled vibe with Eastern European barbecue style dishes). Any of these, or many others in the city, will do you quite nicely.

There is the obligatory Celtic, Irish-style pub also as with most cities in the world 🙂

The wartime conflict split down ethnic lines which encompassed religions that differing majority groups practiced. With the fighting now a memory and consigned to the past, it is nice to visit the area where minarets proclaim the daily call to prayer with an almost mundane, everyday feel about it. It is just part of life for many locals and not something that is controversial in any way.

Near to the main market you will find a lovely mosque building with a modern, understatedly ornate courtyard and fountain. Locals will often be seen removing shoes, washing feet and preparing to enter and pray. This may well not be something relevant to your beliefs, regardless of whether your own are an alternative religion or none at all, but it is very nice indeed to be able to see a previously embattled populous simply move on regardless of which house of worship they frequent. The building itself is noteworthy and pretty without being ostentatious and you’re likely to pass it on your meandering through the area at some point.

You might come across a situation where a utility stops working temporarily which is no doubt down to the infrastructure being subject to stutter step or two. You are not in a cosmopolitan city like London or Paris so calibrate your expectation appropriately. Sarajevo has a wonderful character about it and is a place that merits being on any travel destination list that encompasses the Balkans.

While visiting the absolute best bar in town, Zlatna Ribica, we were told that “there is no running water on this street tonight” by the wonderful lady who was running the place. No issue, no gripe, just get on with enjoying yourself. When the water did come back on later in the evening we were given a nice complimentary jug of it to wash down the excellent selection of top shelf spirits on offer. Good from you Sarajevo!

If you have the use of a car then you can easily drive South West for a couple of hours to visit Mostar. The main attraction of making the journey is the famous bridge that straddles the river Neretva that is known simply as Stari Most (so literally translated as “Old Bridge” in English) to the locals. It is a UNESCO World Heritage site and a lovely example of Balkan architecture made famous not only by its aesthetics but also its featuring in several music videos from Bosnian musicians. 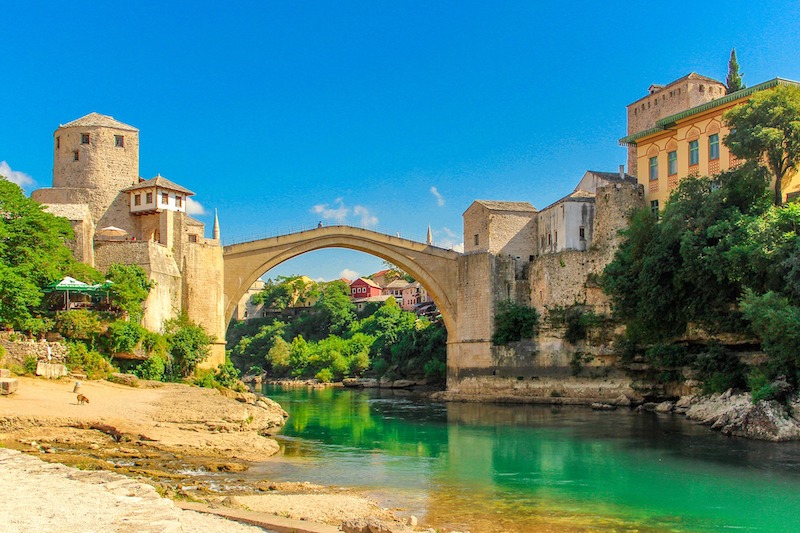 A drive to see Mostar and its wonderful bridge is definitely worth considering if you have time.

Croatia awaits for the adventurous traveller

A road trip though the mountains is an amazing way of trekking between Bosnia and neighbouring Croatia. The land border can be easily crossed - any rental car will provide you with a green card to cross - and then you have the choice of destinations. A brilliant contrast to the hills of Sarajevo would be the coastal resort of Dubrovnik, famed for its high ancient city walls, hotter climate and, weirdly, abundance of cats?! If you were to make the trip by road, including a stop over in Mostar to see the bridge, then you could expect to have a scenic drive of around 6 hours which is just short enough to be the right side of reasonable. You could also obviously do the trip the other way beginning in Croatia instead and making your way to the Bosnian capital. Either way, the contrast experienced is striking and definitely makes for a diverse trip.

Things to do in Sarajevo